Scene Snippets to Keep Us Connected 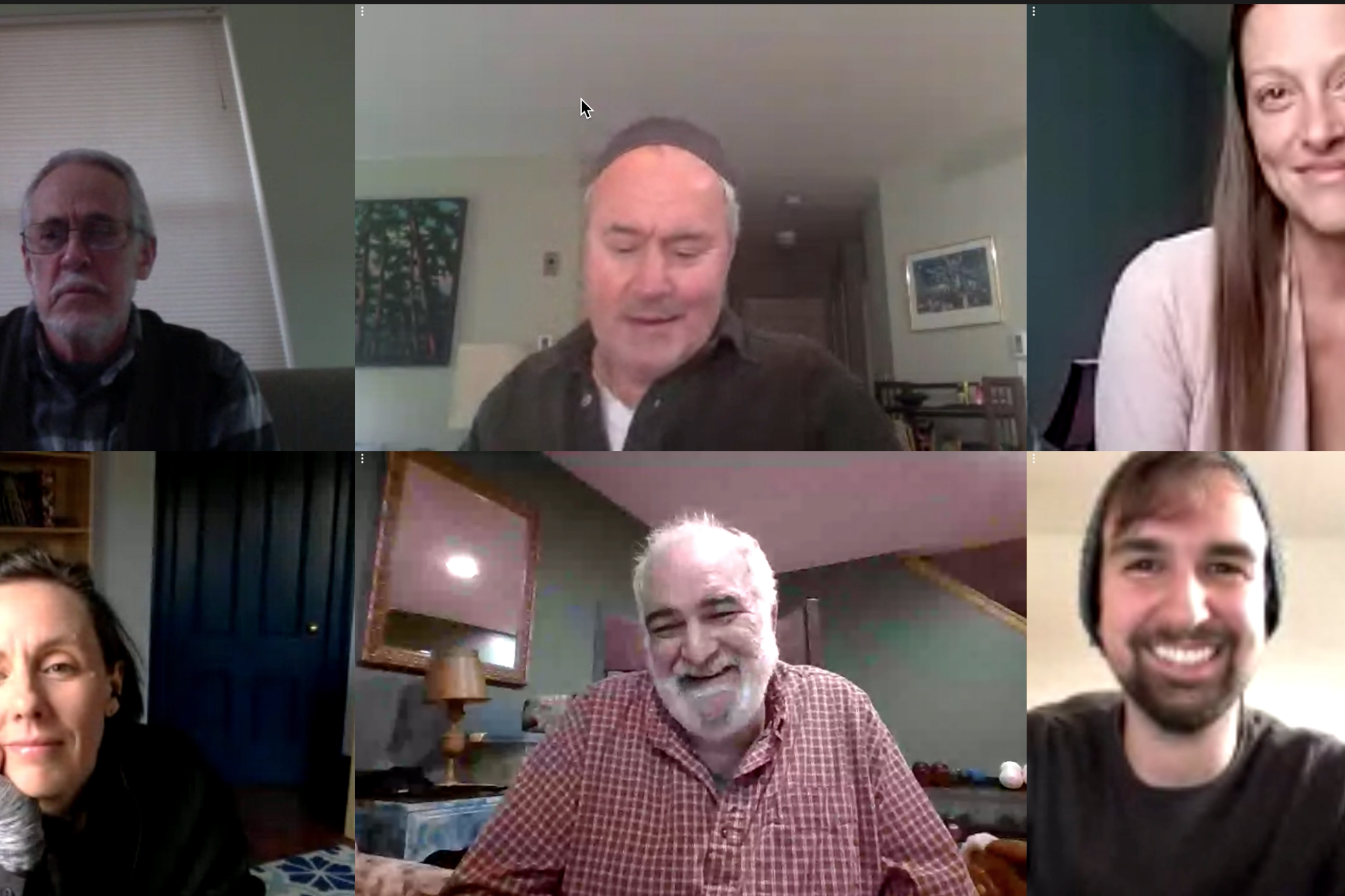 Lost Nation Theater Company Members, Alumni, and Guest Artists
Share Readings, Recitations, and Recreations of moments in plays here at LNT,
Some projects they hope to do someday, or Just Share with Us What they're up to these days - or what show they'd like to do over!

All of us are beyond grateful to our oh-so-generous colleagues and friends, who are willing to share moments from work already recorded, or who are creating new readings. recitals or reminisces from projects and productions here at LNT, as a way to keep us all together, in touch, and connected while we are unable to meet "live and in person" at the Theater due to Covid-19.

We hope you enjoy!
Let us know!
The company is on furlough, and our home, Montpelier City Hall, remains locked down - so please be in touch via email: info@lostnationtheater.org

We all need dreams! Here's Gee Gordon Michaels singing Craig Carnelia's What You Call a Dream from our 2005 production of Diamonds (directed by Tim Tavcar, musical director Lisa Jablow)

As we get used to May's warmer weather, we hope this poem of Wendell Berry's, read by LNT Founder Kim Allen Bent brings you a little peace!

For the beginning of Spring - we bring you another installment of Favorite Lines of our Founding Artistic Director Kim Allen Bent!
This time: A little Mary Oliver

For Valentine's Month - here's a sweet tune sure to lift your heart!
We present Miumiu - a six-year-old guitarist based in Nanjing, China.
Her full name is Zhou Zhaoyan - Miumiu is a family nick name - and she has recently become an Internet sensation thanks to online videos of her singing and playing guitar. Her skill is astonishing! She's been playing guitar for about 2.5 years.
I hope you enjoy her message and song!

More from Mary McNulty and Ryan Halsaver - this time a schmattering of Shakespeare & Richard III
in a scene they recorded for "Food of Love Productions" - we are very grateful to Food of Love, Mary & Ryan for sharing. It's REALLY funny!

LNT Alumni: Mary McNulty and Ryan Halsaver Sing about being home for the holidays!

(Don't worry! Mary & Ryan are a couple - so they are in the same "bubble"! Enjoy their moving rendition of "I'll Be Home for Christmas" musical arrangement And videography by Ryan!
You've seen Mary on our stage in Midsummer, God of Carnage, Ransom, The Last 5 Years, and Ryan in Our Town.
Based out of NYC, they are both proud members of AEA and SAG/AFTRA.
For more on what they are up to: https://www.mary-mcnulty.com/ and http://www.ryanhalsaver.com/
So grateful to them for sharing!!

Evie is 13 and from Berlin. She was coached by Kim Bent, focusing on character, rhythm, and dynamics.
Hope you enjoy! And if you or a student you know are interested in private coaching - there's still time to sign up.
Get more info

Kim Allen Bent Shares More Favorite Lines (one from Budbill, one from Frost) ...

In time for Halloween! Edgar Allan Poe's "The Conqueror Worm"

Kim Bent and Bill Pelton get spooky-kooky for some frightful fun! Thanks to founder of the Poe Spooktacular feast for the music design and to producing artistic director Kathleen Keenan for the idea & videography!

offering up a little Woody Guthrie to start off our concert (Sat Oct 17 2020) and "This Land is Your Land".
The concert highlighted songs from shows of LNT's past - and shows we hope to do in the future. LNT has presented "Woody Guthrie's American Song" twice! First with our Montpelier High School Conservatory program in 2000 (featuring George Woodard, Todd Wheeler, and Michael Henderson alongside the students) and again in 2014 (with Aaron Aubrey, Liz Gilbert, Kathleen Keenan, Chuck Meese, and Eric St Cyr, with musical direction by Dan Bruce). Kim Bent directed both productions.Our thanks to Taryn, Susan & Shanda and sound gurus Bennett Shapiro and Andrew Vachon.

Getting us Back in A Shakespeare Mood!

LNT's 2015 production was directed by Kim Allen Bent and designed by Shawn Sturdevant & Janine Woods Thoma. The music is by Kathleen Keenan. Choreography by Taryn Noelle. This song is sung by Taryn Noelle and the dancers are Kate Kenney and Leighton Samuels

Emily Dickinson's Hope is a Thing With Feathers

Hope is the Thing with feathers - HD 720p from Lost Nation Theater on Vimeo.

Back to a little humor! Thanks to Dan Renkin and this excerpt from Complete History of Comedy-Abridged!

AEA actor and fight choreographer DAN RENKIN explores a 'French' answer to "Why did the chicken cross the road?" -  the first of many mysteries needed to be solved in The Complete History of Comedy, by Austin Tischler & Reed Martin, at Lost Nation Theater in June 2019.
Somehow this answer seems all too appropriate for 2020!!

Missing all these lovely people and artists who created this show!

What Would You Do - from Cabaret at Lost Nation Theater 2019 from Lost Nation Theater on Vimeo.
In this song, Frauline Schneider is defending her choice of self-preservation, rather than "fighting" and risking all by continuing her engagement with her Jewish Fiance, Herr Schmidt.
What Would You do? This song seems particularly relevant right now.  Directed by Tim Tavcar. Musical Direction by Patrick Wickliffe.

Actor - Singers Kathleen Keenan, Ashley Nease and Meredith Watson, accompanied by musical director Nancy Hartswick and trumpeter Ron Thompson, perform "I Got a Right to Sing The Blues" from LNT's 2014 production of Blues in the Night. That musical was directed by Tim Tavcar and designed by Ellen E Jones (scenic/lighting) and Cora Fauser (assisted by Dee Kaganova & Ingrid Nielsen) and stage managed by Kris Weir.
music by Harold Arlen and lyrics by Ted Koehler.  Blues in the Night was concieved & arranged by Sheldon Epps
The lyric "We sing this song when things go wrong. Our song helps us to chase the blues away" really resonates right now!

Nick Wheeler ( as The Baker, who was to return for Brilliant Traces this July) and John Marshall, musical director Lisa Jablow and director Tim Tavcar have all generously allowed us to share this with you!
Here's to the "Happier Days" and John & Nick's NO MORE.

Christopher Scheer as Touchstone (and others!) in our 2015 production of As You Like It
directed by Kim Allen Bent.
scenic design by Janine Woods, costumes by Shawn Sturdevant, sound by Frank DiSalvo

John D Alexander offers up a little from The OLD Italian Carver in STONE - by Kim Allen Bent.
"When you feel love for something, that is the time to do your work"
costume design: Cora Fauser. Lighting design Charlene McMannis

Now Until The Break of Day - A Midsummer Night's Dream, 2011

Shakespeare's work is so suited to musical adaptation.
In Lost Nation Theater's 2011 A Midsummer's Night Dream (like its original 1998 production), not only were the songs performed - but some of the speeches were turned into song. This tune, is from the end of the play, when the fairies are leaving - it is their plea/blessing (led by Puck) for all to remain safe and well as they slumber. Lost Nation Theater wishes to share that blessing - that we stay safe, well, and have peace - with everyone now, in this particularly challenging and stressful time.
Music by Kathleen Keenan.
Additional vocal arrangements - Kathleen Keenan, Caleb Probst, Shawn Sturdevant
Guitar Arrangement- Kathleen Keenan. guitarist: Aaron Aubrey.
The Singers:
Eric William Love (as Puck); Aaron Aubrey (Flute); Mary McNulty (Titania/Hippolyta) Caleb Probst (Lysander)
Lost Nation Theater's 2011 production of William Shakespeare's A Midsummer's Night Dream was Directed by Margo Whitcomb.
Scenic & Lighting Design by Claiborne H Coyle;  Costumes by Bell-Fauser & Smith; sound by Shawn Sturdevant
Stage Manager: Tara Lee Downs LNT Artistic Directors: Kim Allen Bent & Kathleen Keenan

This speech is Oberon's in Shakespeare's original text.
LNT's production doubled Oberon/Theseus and Titania/Hippolyta, so the speech was turned into a song and given to Puck and company.

Taryn Noelle dances new choreography to the theme song "Believe" for our original Theater FOR Kids BY Kids The Little Prince, lyrics by Kim Bent, music by Kathleen Keenan.
"Who's to say there's not more we can't see? Listen to your heart. Believe"