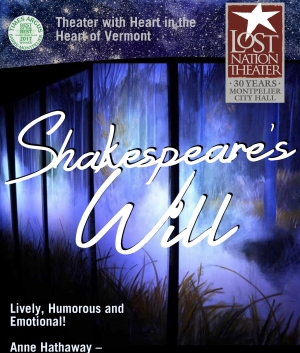 Shakespeare's Will
by Vern Thiessen

He was the most famous man in literary history.
She was cloaked in silence and invisibility.
An original, often hilarious portrait of Anne Hathaway
Now...Madame Shakespeare is having her say

Inspired by the few historical facts known about The Bard, his wife Anne, and their family, Shakespeare’s Will is a lively, humorous and emotional depiction of Anne Hathaway – accidental mother, proudly imperfect wife, and defiantly liberated woman in Elizabethan England.
Directed by Eric Love.

poetic, humorous masterful solo, in which the Bard’s Wife gets the last word!
performed by Margo Whitcomb.

Inspired by the few facts known and challenging the myths, this renowned Canadian playwright has crafted a portrait of  an accidental mother, proudly imperfect wife,
and defiantly liberated woman.

“Time flies when you’re having fun … one person theater can be a drag, but not this time around. The stage abounds with characters, all of them displayed by the actress in the spotlight.”  The Berkshire Eagle

This 90 minute play is performed without intermission

Check out Jim Lowe's Preview Feature in the Times Argus

proud to be a designated Vermont Arts Council arts event