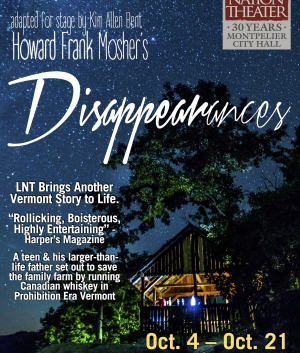 LNT Brings Another Vermont Story to Life. “Rollicking, Boisterous, Highly Entertaining” - Harper’s Magazine.
A teen (“Wild Bill”) & his larger-than-life father (“Quebec Bill”) set out to save the family farm by running Canadian whiskey in Prohibition Era Vermont. On an epic journey through the wilderness, Bill and his father encounter a cast of wild characters—and live out magical escapades as they carve their way into legend.

We recommend the production for ages 12 & up. (Some cussin' and historically-accurate slurs re: French Canadians)

This is the first time one of Howard Frank Mosher's novels is being "translated" for the stage.
We are honored and humbled by the trust Mosher's family has shown in LNT allowing us to do it.

Kim Bent interview on Why DISAPPEARANCES

George Woodard Exhibits his Photo Essay in the Lobby Gallery during DISAPPEARANCES and enjoy a short pre-show talk with George on Sun Oct 14 (1:15pm)

Get Audience & Critical Reaction to and Photos of LNT's DISAPPEARANCES!

Compelling Rambunctious Storytelling with a Twist.

Hear the Actors Talk About the Show

proud to be a Vermont Arts Council Arts Event