Behind the Scenes: 1! (creating the set for Both Eyes Open) 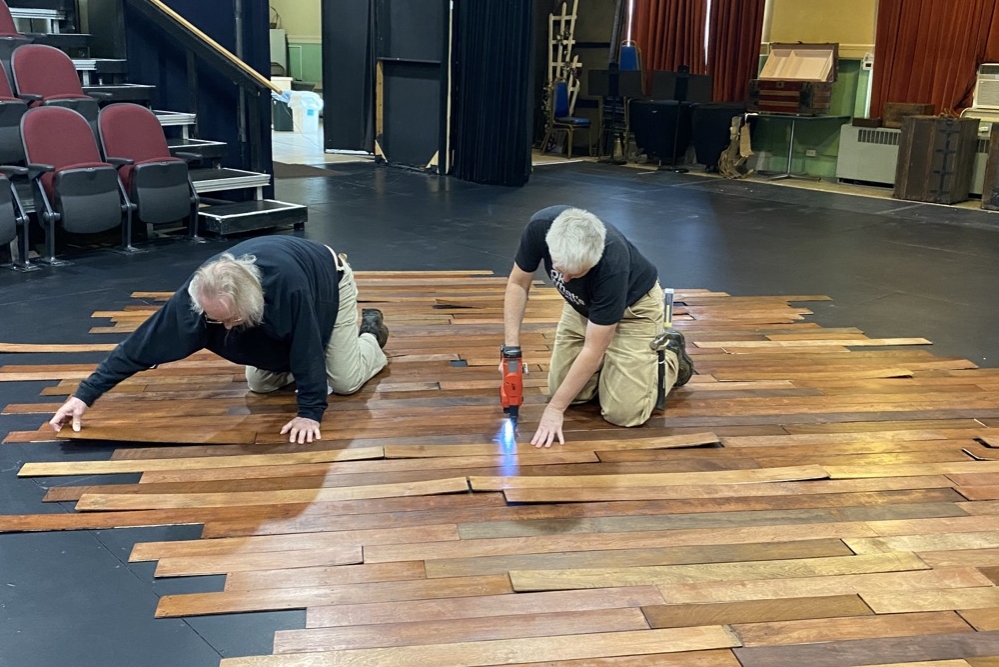 A Peek into the Process of bringing "Both Eyes Open: The Annie Oakley Story" to life on-stage
from the backstage - scenic - perspective!

Well, really, the first step in any process is getting the right designers and collaborators in the room with you.

For Both Eyes Open, we decided we had the had the right person already on board with founding artistic director Kim Bent.
(Kim also did the sets for 2017's Kate (the unexamined life of Katharine Hepburn) and 2019's Shakespeare's Will.)

Not only does Kim have a great eye, as an actor, director and playwright himself, he has loads of experience developing new work and bringing never before produced plays from idea, to words on a page, to the three-dimensional world of the stage.

In addition, we have been lucky enough to secure the talents of Laura Gist (former LNT PSM and Props Designer) and Ann Harvey (known best for her Shakespeare and Song, but also a killer props/dressing designer) along with our TD Robyn Osiecki to complete the team.

The question to be answered design-wise in the show is how to marry the realistic element of the story with the high theatricality of the presentation.

The answer, for us, was to start with the floor.
And re-use. recycle/up-cycle.

A) With stock flooring (that is actually strips of luan plywood), we create a world that grounds us, but also lets the audience in and time be amorphous.

B) But that flooring is stock - the salvageable pieces from 5 other shows! It needs to go through a process to transform it to be the floorboards of one room - Annie Oakley's drawing room in Ohio!

1) First things first. Kim and Robyn root through all the places floor pieces from previous shows might be saved.

2) Robyn then brings it all out to her shop. The boards are all different widths.
They need to be run through a table saw (on both sides) to make them uniform.

This is how much sandpaper it took to sand all the boards used in the design.

3)The boards are from all different shows. That means they have different finishes. That means the boards have to be sanded down in order to be able to 'take' the new stain/finish that Kim and director Kathleen Keenan have chosen. (In this case a mahogany finish.)

4) Having been sanded, the boards all get stained -

The sanding and re-staining process>  the drying rack

6) Then, they are re-bundled for easy transport.

7) The boards then came back to the theater and were laid out on the stage floor.

8) Kim then used his eye to match the wood and create a pleasing variation in how the boards lined up with one another, and create a somewhat defined playing space.

9) In consultation with director Keenan and TD Osiecki final decisions were made.

TD Robyn Osiecki mugs for the camera whilst nailing down the floor.She was excited to be using a battery-powered nail gun which allowed them to finish putting the floor down in three hours, rather than the two days it might have taken them if doing it "by hand"

Add all that time up, and it took nearly two week's of work just to create the floor for the production.
Some might say "why didn't you just paint it?" To get all the graining to make it 'feel real' would likely have taken  2-3 days itself, but it wouldn't have given the feel we wanted for the show.

More installments on Behind the Scenes Creating Both Eyes Open: The Annie Oakley Story to come! Props, Dressing, and Costuming!
Stay tuned!