Stories for the Season - Goes Virtual 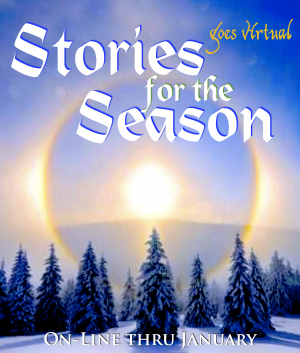 Stories for the Season 2021 - Virtual

A winter holiday-inspired special event - LNT's Fourth Annual "Stories"
But - due to Covid-19 pandemic still being upon us, we're sharing these wonderful stories via the virtual world, and bringing you solo readings.

Join favorite LNT artists for cozy dramatic readings of stories from around the world celebrating the return of the light -  from a host of differing traditions.
Offerings will include a sprinkling of Native American stories, a dab of Dickens, and Hanukah tales & poems.

Fun for all ages.

Stories will be released individually throughout December and into January, 2022.
Scroll down to see the stories!

Many of the veterans of LNT's "It's a Wonderful Life Radio Play" are part of this special event!

This story is by Isaac Bashevis Singer.
To those who celebrate we wish you a Happy Hanukkah filled with much light, laughter, sweetness ,and love.

About Isaac Bashevis Singer:  Isaac Bashevis Singer was a Polish-born Jewish-American writer who wrote and published first in Yiddish and later translated himself into English with the help of editors and collaborators. He was awarded the Nobel Prize for Literature in 1978. Find out more: https://www.nobelprize.org/prizes/literature/1978/singer/biographical/

About Maura O'Brien: Maura's been seen on the LNT stage in such shows as Becoming Dr Ruth, Sylvia, Macbeth, Midsommer Nights Dreame, Moonlight & Magnolias, and most recently the staged readings of Annie Oakley - a solo show wirtten for her by Jeanne Beckwith. A member Actors Equity Association) has appeared in theaters through New England, Boston, NYC, has her MFA from Trinity Rep, and has been a company member of Lost Nation Theater since 1998. We are grateful to her for sharing her talents with us!

Kim Ward has been a member of LNT's Creative Family since 2000 - working onstage, backstage and behind the scenes. A director/choreographer, playwright, poet, performer, and stage manager, Kim is the founder of Vermont Playwrights' Circle. A former "Wonderful Life" regular, she has been part of all our "Stories for the Season" as well.
Kim brought Dvora's story to us for our first "Stories" in 2018! They debuted together and we love that we get to continue to share this beautiful story with you.

Dvora Zipkin is a member of Vermont Playwrights' Circle, and LNT regulars may recognize her from her work volunteering in the box office .
Her story "A Gift of Light" has been a crowd favorite since its debut and we are so grateful to Dvora & KIm for sharing the story with us in this manner.
Encouraged by the response by LNT artistic directors and audiences to her story, Dvora developed it into a one-act play that was part of Chicago's Possibilities Theatre 2020 "12 Days of Holidays" Zoom Fest, and based on that great response and encouragement, is now working on a full-length script.

A wonderful story of the cycles of life and perfect for this time of year as we celebrate the return of the light.

Cher Laston is an educator and theater performer/director in Central Vermont who has been part of Lost Nation Theater since the early 2000's as an actor, children's theater director/instructor, and board member. She works regularly with the Pride Festival in Randolph and was a member of the staff of U-32's Award Winning Drama Program.

G. Richard Ames reads "Why Hummingbird Has a Red Throat"

G. Richard Ames last appeared for LNT in our 2021 Shakespeare On the State House Steps staged reading of As You Like It, on April 23 for a livestream of his own work, It's Him Material, and last September 20 at the State House as Lysander in our inaugural Shakespeare on the State House Steps:  A Midsommer Night's Dreame; and first appeared with LNT in 2004. But Most Recently, he appeared at QuarryWorks as Mark Twain in excerpts from Hal Holbrook's Mark Twain Tonight! He lives in Burlington with his cat, Luxe (in a tux), and works as the co-op specialist for Champlain Housing Trust. This coming April he will appear as Miss Trunchbull in Lyric Theatre's production of Matilda at the Flynn.

O. Henry's "The Gift of the Magi"
Read by LNT Founding Artistic Director Kim A Bent

The Gift of the Magi is one of Kim's favorite stories because: "It is a meditation on the act of gift-giving, a celebration of those things we value, and the ability recognize that things outside ourselves are worthy, deserve to be sacrificed for and honored. It's a mediation on the miracle of love."
We're delighted to share it with you in time for The Epiphany!
The story was written in 1905. The music in the video is "Christmas Blessings" and recorded in 1908.

Elsa Beskow was a talented and famous Swedish author and illustrator of children's books. She is often called the 'Beatrix Potter' of Scandinavia. Among her better known books are Tale of the Little Little Old Woman and Aunt Green, Aunt Brown and Aunt Lavender, Children of the Forest, and, of course, The Sun Egg (which she wrote in 1932). Ms. Beskow lived from 1874 until 1953.

Kathleen Keenan, in addition to being the producing artistic director of LNT is also the company's resident composer. An actor/director/singer-songwriter and composer, she performed Off Off Broadway and at Lincoln Center prior to joining the company. She is perhaps best known at LNT for staging quick-change comedies, Katherine Paterson's Lyddie, writing the music for Shakespeare and original youth-dance-theater productions, and title roles in Belle of Amherst, Molly Sweeney, Educating Rita and playing Mrs. Lovett in Sweeney Todd.