Stories for the Season 2020 Goes Virtual 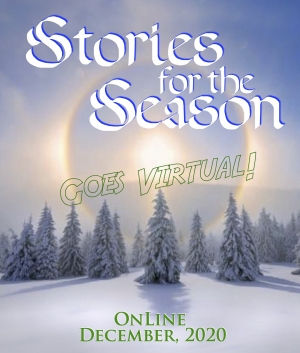 Stories for the Season 2020 Goes Virtual

A holiday-inspired special event - LNT's Third Annual "Stories"
But - due to Covid-19 restrictions, and our home - Montpelier City Hall still being closed, we're taking the stories to the virtual world, and recording solo readings.
(Strictly following the protocols and guidelines to keep our artists safe!)

Join favorite LNT artists for cozy dramatic readings of stories from around the world celebrating the return of the light -  from a host of differing traditions.
Offerings will include a sprinkling of Native American stories, a dab of Dickens, and Hanukah tales & poems.

Fun for all ages.

Stories will be released individually throughout December and into January, 2021.
Scroll down to see the stories!

Many of the veterans of LNT's "It's a Wonderful Life Radio Play" are part of this special evening!

Kim Ward kicks off 2020's Stories of the Season by reading "A Gift of Light" - a story for Hanukkah - by Vermont's own Dvora Zipkin.

Kim Ward has been a member of LNT's Creative Family since 2000 - working onstage, backstage and behind the scenes. A director/choreographer, playwright, poet, performer, and stage manager, Kim is the founder of Vermont Playwrights' Circle. A former "Wonderful Life" regular, she has been part of all our "Stories for the Season" as well.
Dvora Zipkin is a member of playwrights circle, and LNT regulars may recognize her from her work volunteering in the box office .
Her story "A Gift of Light" has been a crowd favorite and we are so grateful to Dvora & KIm for sharing the story with us in this manner.
Encouraged by the response by LNT artistic directors and audiences to her story, Dvora has developed it into a one-act play that is currently part of Chicago's Possibilities Theatre "12 Days of Holidays" Zoom Fest. It has live zoom performances on Dec 13 and 21. Get the details: facebook.com/events/12daysofholidays

(Maura's been seen on the LNT stage in such shows as Becoming Dr Ruth, Sylvia, Macbeth, Midsommer Nights Dreame, Moonlight & Magnolias. A member Actors Equity Association) has appeared in theaters through New England, Boston, NYC, has her MFA from Trinity Rep, and has been a company member of Lost Nation Theater since 1998. Also trained as a nurse, Maura is actively involved in Vermont's response to the Covid-19 pandemic. We are grateful to her for sharing her talents with us!)

LNT's Wonderful Life, Mary Hatch - that is Cher Laston - returns with her own favorite story: Through the MIckle Woods

Cher Laston, a longtime member of LNT who's worked behind the scenes, onstage, and in our education programs, is probably best known for playing Mary Hatch in our annual "It's a Wonderful Life.
We are so delighted that she is with us all once again, just in time for the Winter Solstice with  Valiska Gregory's modern medieval-set fairytale. It's the story of a young boy and a grieving king  who find peace while listening to three stories told by a bear after journeying to the mickle (great) woods. A wonderful story of the cycles of life and perfect for this time of year as we celebrate the return of the light.

G Richard Ames reads "Why Hummingbird Has a Red Throat"

Happy Solstice! This story comes to us from the Olamentko Tribe of the Miwok Nation. Unfortunately, the Miwok (a coastal people who lived in California for thousands of years) were very nearly wiped out. Anthropologists recorded their stories - and this story of how the sun was returned to the people was recorded in 1910 from the last surviving member of the Olamentko.
Rick's reading was taped on Lost Nation Theater's stage December 2020, with scenic design by Kim Allen Bent and lighting by Samuel Biondolillo.
With LNT since 2004, Rick is also active with Quarryworks Theatre and is a Board Member of Burlington's Off Center. He won Broadway World's  2019 "Best Actor" Award for his work in LNT's Complete History of America- Abridged.

The Gift of the Magi is one of Kim's favorite stories because: "It is a meditation on the act of gift-giving, a celebration of those things we value, and the ability recognize that things outside ourselves are worthy, deserve to be sacrificed for and honored. It's a mediation on the miracle of love."
We're delighted to share it with you on The Epiphany!
The story was written in 1905. The music in the video is "Christmas Blessings" and recorded in 1908.