Rick Winston - All The Films A Stage 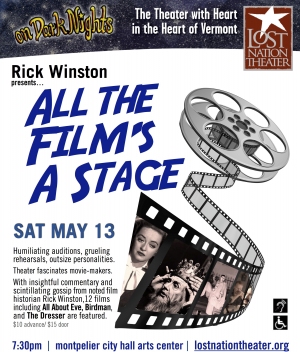 What goes on backstage has long been a staple of films.

An evening with noted film historian and all-round film-buff Rick Winston, with highlights of his favorite theatrically-focused movies, and his trademark insightful commentary and scintillating insider gossip.

There will be clips from twelve films, both American and foreign, that examine what goes into a theater production, including such classics as ALL ABOUT EVE, CHILDREN OF PARADISE,  TOPSY-TURVY and THE DRESSER.  Plus more modern classics like BIRDMAN.

Rick grew up in Yonkers, New York, and became hooked watching old films on TV at a young age. He went to Columbia College and University of California, Berkeley, where there were many opportunities to catch up on films while putting off writing English Literature papers. Rick moved to Vermont in 1970 and shortly afterward founded the Lightning Ridge Film Society, which morphed into the Savoy Theater in 1981. A founders of Montpelier’s Green Mountain Film Festival, Rick was its Programming Director until 2012. At the festival, he also instituted featured interviews with a nationally-known film writers including critics and historians Phillip Lopate, Stuart Klawans, Molly Haskell, Kenneth Turan, Kathleen Carroll, Matthew Hays, Jeanine Basinger, Godfrey Cheshire, and Peter Rainer.  Since 2009, Rick's been teaching film at Burlington College, Community College of Vermont (Montpelier), and the Montpelier Senior Activity Center, while speaking on film subjects for the Vermont Humanities Council. Some of my other interests and projects include historical research on Vermont During the McCarthy Era, and constructing twice-monthly “double crostic” puzzles for the Times Argus/Rutland Herald.