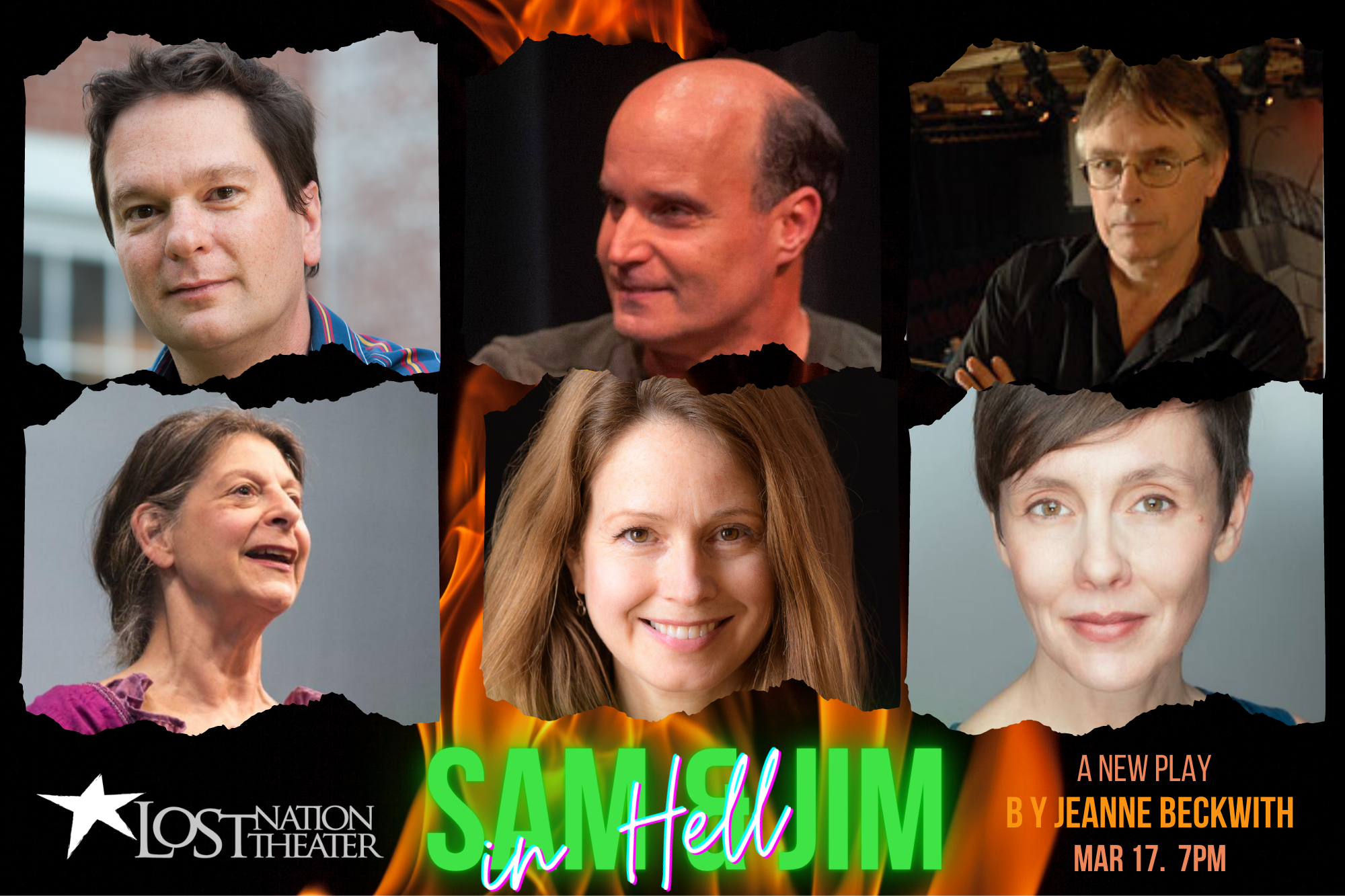 “I think it’s a brilliant idea, particularly at this point in time against the background of our Covid-carved landscape, to put Beckett and Joyce together to commiserate, confide, cajole, and confound each other.” – says Lost Nation Theater founder Kim Allen Bent, who is directing the reading.

Our gift to you: it’s Free!  Wednesday. March 17 at 7pm.
It's Online!
Register for the Link Here

The idea for Sam & Jim in Hell came as Jeanne walked along the banks of the River Liffey in Dublin about a year and a half ago. Jeanne saw the Samuel Beckett Bridge, and wondered what Beckett might think about a bridge named in his honor. She thought about how Beckett  - and his compatriot James Joyce -  had both become Irish Icons in spite of their feeling estranged from the Ireland of their time.

And then she thought, "That must be hell for them."

In that moment, she started writing the play in her head!

Fast forward to Jeanne, trapped inside during the pandemic, immersing herself in biographies about Beckett & Joyce and re-reading all their works – and crafting a full-length play.

Lost Nation Theater recently presented a live-streamed fully staged production of Jeanne's Love Letters Made Easy - and now LNT is excited to share the beginning of the play development process with you through this rehearsed reading of her newest play!

Lost Nation Theater has assembled another great cast for this reading from their extended family of creative artists. Taking on the titular roles: Ethan Bowen and Scott “Renzo” Renzoni.  Ethan (artistic director of Bald Mountain Theater, known for his work with Vermont Stage and LNT in addition to his own company’s works) plays Samuel Beckett.  “Renzo” - a Jeopardy champion as well as a professional actor and poet - returns to LNT after 19 productions – including Judevine and Hound of the Baskervilles to play James Joyce.

Anyone heading to the afterlife needs a guardian, and noted director/actor Margo Whitcomb (Shakespeare’s Will, Midsummer Nights Dream) is there to help in the role of “Colleen of the Gate.” Abby Paige (Judevine, When We Were French, Love Letters Made Easy) is back again to read “Suzanne” – Beckett’s wife; while Sorsha Anderson (popular Vermont actor) is back for her 2nd pandemic project with LNT as “Lucia” – Joyce’s troubled daughter.

A post on social media alerting friends & fans that Beckwith was thinking of writing this play was all LNT’s Kim Bent needed to hear.
He immediately told Jeanne to do it and send it his way when she had a draft! Bent is a huge Beckett fan (he’s done Waiting for Godot 4 times!!) And he’s a fan of Beckwith too.
Bent says:

"No matter the genre, her work is always compelling, surprising and incisive.”

We think she hits these notes and more in Sam & Jim in Hell!

Join Us! Online. Live! Wednesday March 17 at 7pm  - One Night Only!
lostnationtheater.org  You must register ahead to get the link to the event: https://forms.gle/v96brqiLg9133PW38

It’s Free – though donations are gratefully appreciated.
Since LNT is closed,  email: info@lostnationtheater.org is the best way to reach us.

Lost Nation Theater: 2020 “Theater of the Decade” - Broadway World, 2014 winner “Best in New England”- Yankee Magazine, and named One of the Best Regional Theaters in America by NYC Drama League is Sponsored by Capitol Copy, City of Montpelier, Eternity, National Life Group, Vermont Mutual Insurance and The World. Additional funding from The Mary Shriver Memorial Fund of the Alan Weiss Estate, The Estate of Ted Richards, and Montpelier Community Fund