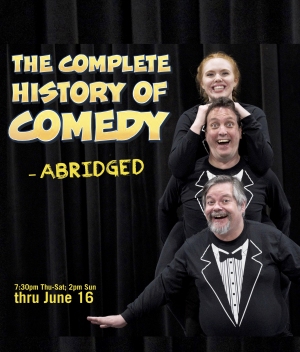 The Complete History of Comedy (Abridged!)

by Reed Martin and Austin Tichenor

No Joke is Left Untold!

If you loved Complete Works of Shakespeare-abridged, you’ll love this show - one of the most recent works by those Bad Boys of Abridgment - Reed Martin and Austin Tichenor!
Explore what makes people laugh from ancient times til now!
Madcap, topical, & witty skits, standup, slapstick, satire, one-liners, cream pies, double entendres, jokes, jibes, and other silliness!
LNT's cast will feature a mix of old-favorites and comedians new to our audiences.

Where does comedy begin? Where does it end? What makes something funny? And most importantly of all, why did the chicken cross the road?

Wanna know why he swallowed a fly? Come see Dan Renkin in action! It's Hilarious!!!

“THE COMPLETE HISTORY OF COMEDY (abridged) is a master class in the art form.” — Broadway World

"Hilarious. And the scope of their humor knows no bounds.”  – Cincinnati Enquirer

Proud to be a Vermont Arts Council Designated Arts Event