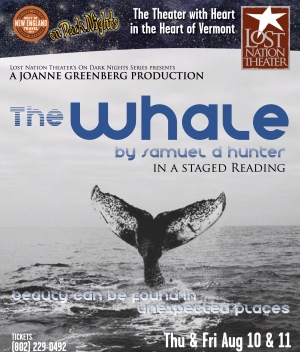 THE WHALE - Beauty can Be Found In UnExpected Places

A staged reading of Samuel D. Hunter's contemporary play in a Joanne Greenberg Production, as part of LNT's "On Dark Nights" event series

Big-hearted and fiercely funny, The Whale tells the story of a man's last chance at redemption

On the outskirts of Morman County Idaho, a 600-lb recluse tries to make amends with his estranged wife and embittered teenage daughter. Poignant truth-telling and surprising humor intermingle as he deals with his online college students' essays, his family, and a Mormon missionary's sudden visit. The Whale tells the story of one gay man’s last chance at redemption.
"A deeply affecting and piercingly amusing play... that leaves an emotional wallop." (New York Daily News)

On Dark Nights is an LNT special event series in which the company helps support other artists and performance groups (music, theater, dance, circus) to get their work in front of central Vermont audiences.

These events happen throughout the year, when Lost Nation Theater's  mainstage and youth plays are "dark" (the industry term for "no show that day")
It's LNT's pleasure to share it's resources to continue to inspire the creative community of Vermont and to bring artists to VT who central Vermont audiences might not otherwise get to see through this collaborative series.

Joanne Greenberg, an educator and theater artist, is known for her interest in directing and developing contemporary plays. For 30 years, she was instrumental in developing and leading the stellar theater program at Union 32 Jr-Sr High School. As a freelance director, her work has been seen in VT at Phantom Theater,   Actors' Repertory Theater (in Rutland) and other theaters across Vermont.