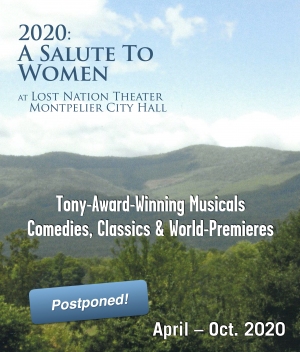 And now, due to the Covid-19 pandemic and the heartbreaking choices LNT's Board of Directors faced in order to keep our larger community, our students, and our staff & artists safe, we will be opening our season in the fall with Ragtime.
(That's the current plan.)

We have received permission from the City of Montpelier to leave the chamber theater in place, which allows us to add a show in the late fall/early winter to the schedule.
(This show, TBD, will be part of the 2020 season and included with 2020 Season Tickets.  At this time, all shows prior to Sept 2020 will be rescheduled to 2021.)

Meantime, LNT has launched a Patreon Page to accomodate season ticket holders and offer theater to our patrons. Visit our website blog pages and our facebook page for free content too.
If you'd like to support LNT with a greatly appreciated donation, at this time,, do so HERE.

All Individual show tickets will be on-sale by January 15, 2020 - But Season Tickets Are On Sale Now

The 2020 Season Line Up
from Tony-Winners to World Premiers! Shows that will stun you, leave you shaking with laughter and take your breath away.

Classics, Comedies, Current Hits and Vermont Stories take the stage at Lost Nation -  your community’s award-winning professional theater, hailed as “one of the best in America”
Look for your favorite LNT performers, directors, and designers from the past 30 Seasons at Montpelier City Hall during the season, plus introductions to new artists involved with each show!

For our 32nd year in Montpelier City Hall, join us as we celebrate a Salute to Women, honoring the hard-fought win for the right to vote just 100 short years ago. Every play, musical, and comedy we’re presenting in 2020 is either written by a woman, features strong female protagonists, or highlights the achievements of women.

April-May:  Gruff! The Musical   POSTPONED Due to Coroavirus closings. (We are working on rescheduling and will update as soon as we know!. Thank you for your patience)

by Ora Fruchter, Christopher Scheer and Toby Singer.  A Co-Production with Dopplescope. Gruff will be directed by and star Chris Scheer.
An epic fairytale eco-musical and interactive reinvention of Three Billy Goats Gruff for all ages.  In a world that's become a toxic junkyard, a young goat discovers Troll Valley – the only surviving oasis left on Earth. Will her elders drill for fuel there? Will her quest to make the world green again succeed? The Fate  of the World hangs in the balance. Is it for kids? Is it for adults? YES! Gruff! combines multiple styles of puppetry with physical theater, comedy and unforgettable songs.
Christopher directs as well as performs.
“Endlessly Inventive” - NY Times

June: The Revolutionists. by Lauren Gunderson  POSTPONED Due to Coroavirus closings.

Four bold n bodacious women try not to lose their heads in this irreverent, rebellious, girl-powered comedy set during the French Revolution. Amidst the Reign of Terror, four renegades—an assassin, a spy, a writer, and, of course, Marie Antoinette—hang out, plot murder, and find friendship,. Armed with sharp wit and even sharper knives, this comedy of liberté, égalité, and sororité explores how we actually go about changing the world. The latest modern comedy by the playwright who gave us (20218's) Silent Sky.
“sassy, hold-on-to-your-seats theatrical adventure…” Cincinnati Enquirer  "simply a brilliant script…” —CityBeat

Have you ever had your heart broken? Have you ever wanted to just run away? Who hasn’t!
In Brilliant Traces, Rosanna takes that desire to the extreme. She runs away from her own wedding! Fleeing from Arizona in full wedding regalia!
Driving without destination, she finally breaks down in the midst of a whiteout in Alaska, stumbling her way into Harry’s remote cabin. And that's when the real adventure begins!
"Beautiful. Yes, your heart can be broken. But if you're lucky, it can be healed as well, perhaps completely by chance, without ever really looking for it at all." - Backstage
Will feature Courtney Wood (Silent Sky, Syringa Tree, Sylvia and Treasure Island) and Nick Wheeler (Into The Woods, Around the World in 80 Days, Urinetown and Twelfth Night)

July -August - it's Theater FOR Kids BY Kids time - in 2020, the fully produced musical mounted by our most advanced students is Frozen Jr!   POSTPONED Due to Coroavirus closings.

The new one-woman show by acclaimed Vermont performer, Abby Paige, is an autobiographical exploration of ancestry, identity, and storytelling.
An American with French-Canadian roots immigrates to Canada, a century after her great-grandparents immigrated in the opposite direction.
She has questions:
- What does “francophone” mean?
- What’s the deal with the queen?
- Why is Jack Kerouac the only Franco-American anyone’s ever heard of?
- Is Céline Dion a witch?
With this comedic, bilingual one-woman show, writer and performer Abby Paige looks for answers, crossing the borders between English and French, the past and the present, the living and the dead, history (L’Histoire) and stories (les histoires).

by Lynne Aherns, Stephen Flaherty, & Terrance McNally
from the book by E.L. Doctorow
"A Triumph for the Stage" - Time
"Stunning - Start to Finish" - Playbill
The worlds of a wealthy white couple, a Jewish immigrant father and his motherless daughter, and an African American ragtime musician intertwine in this epic, soaring musical about America at the start of the 20th Century. Together, they discover the surprising interconnections of the human heart, the limitations of justice and the unsettling consequences when dreams are deferred.
Sweeping, Epic Tony-Winner traverses the diversity of the American experience to create a stirring epic that captures the beats of the American experience - the anthems, the marches, and of course - the ragtime!