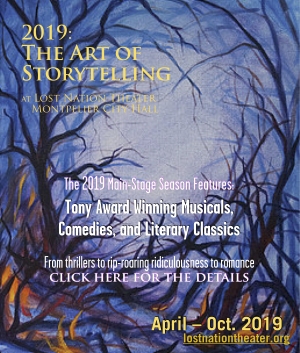 The 2019 Season Line Up
from Tony-Winners to Riotous Comedies to Literary Classics! Shows that will stun you, leave you shaking with laughter and take your breath away.

Classics, Comedies, Current Hits and Renowned Musicals take the stage at Lost Nation -  your community’s award-winning professional theater, hailed as “one of the best in America”
Look for your favorite LNT performers, directors, and designers from the past 30 Seasons at Montpelier City Hall during the season, plus introductions to new artists involved with each show!

April:  Turn of the Screw, by Jeffrey Hatcher from the novel by Henry James.

“Riveting…leaves audiences on the edge of their seats” - NY Times.   Psychological Thriller Turned Theatrical Tour-De-Force.
A young governess journeys to a lonely English manor house to care for two recently orphaned children. She starts to see ghosts of former governesses haunting them. Are the ghosts real or a product of her imagination? Hatcher’s ingenious use of just two actors accentuates a feeling of the Governess against the world! Features LNT fan-fav Christopher Scheer.

June: The Complete History of Comedy (Abridged)  by Reed Martin and Austin Tichenor

One of the great Broadway musicals of all time—an exhilarating, harrowing masterpiece.” - Time Out
In a Berlin nightclub, as the 1920’s draw to a close, a garish Emcee invites us to forget all our troubles at the CABARET. Explores the dark, heady, & tumultuous life of Berlin’s natives and expats as Germany slowly yields to the emerging Third Reich. Love, humor, sex, politics, great music and Fosse-inspired Dance!

August - is our Theater FOR Kids BY Kids month - and in 2019, the fully produced musical being mounted by our most advanced students is The Wiz!
"Ease on Down the Road" with us!

September - Shakespeare's Will, by Vern Thiessen

October - Pride & Prejudice - by Kate Hamill, from the novel by Jane Austen

The outspoken Elizabeth Bennet faces mounting pressure from her status-conscious mother to secure a suitable marriage. But is marriage suitable for a woman of Elizabeth’s intelligence and independence? Literature’s greatest tale of latent love has never felt so theatrical, or so full of life, as it does in this effervescent adaptation.

More Theater FOR Kids BY Kids shows - like Fractured Fables, Man in the Moon, and lots of special events to announce.