Song of the Sea: A Selkie Legend 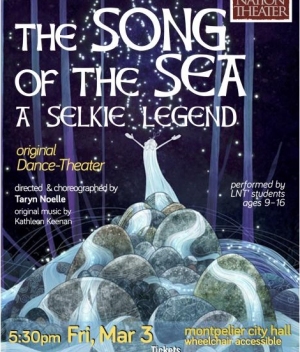 An original dance-theater performance celebrating the Celtic legend of Selkies- or Seal People - beings who are seals in the water and human on land. But, for most selkies - the song of the sea calls them back to the sea!
LNT's Song of the Sea (adapted by Taryn Noelle) is the story of a family, whose mother is a Selkie. After the second child is born, the mother (a selkie) is called back to the sea leaving her newborn - who has inherited her mothers' gift, her husband and older child.
It's hard for the family not to blame the youngest (who is mute) for the mothers disappearance - but the truth comes out and a reunion takes place and hearts and voices are healed in the end.

Song of the Sea-a selkie legend is performed by intermediate level students in LNT's education programs.
In addition to studying contemporary dance and acting, students branched out to explore the use of fabrics and to create live sound effects and soundscapes to tell the story of the play.

Taryn Noelle and Kathleen Keenan teamed up to choreograph and direct (respectively) LNT's 2016 production of Hairspray.