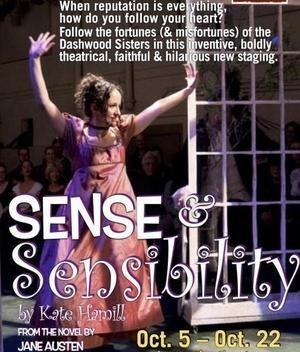 Kate Hamill's playful new adaptation of Jane Austen’s beloved novel follows the fortunes (and misfortunes) of the Dashwood sisters — sensible Elinor and hypersensitive Marianne — after their father’s sudden death leaves them financially destitute and socially vulnerable.
Set in gossipy late 18th-century England, with a fresh female voice, the play is full of humor, emotional depth, and bold theatricality. SENSE AND SENSIBILITY examines our reactions, both reasonable and ridiculous, to societal pressures.

When reputation is everything, how do you follow your heart?

Check Out What Audiences Are Saying about LNT's Production Here

This is a highly physical, almost dance-like, ensemble-oriented adaptation.
A Group of "Gossips" take you through the whole-story, fast and furious. You think internet trolling and viral judgements are bad now, try living in London society in early 1800!

CHECK OUT MARY GOW'S PREVIEW ARTICLE IN THE TIMES ARGUS

“Perhaps the greatest stage adaptation of this novel in history.” — The Huffington Post

“ ... an unconditional delight ... invigorating ... a bouncy, jaunty take on Austen ... remains remarkably true to the values and priorities of its source. The classic Austen preoccupations with real estate, income, class, reputation and equilibrium in life are all rendered brightly and legibly here.” — The New York Times

“ ... inventive, faithful, clever and hilarious. Kate Hamill’s marvelous play is one of the best stage adaptations of a literary classic. Our Jane would have expressed her approval.”
— TheaterScene.net

“ ... so full of galloping comic vitality as to suggest a bunch of stupendously clever kids playing dress-up in the nursery. It’s by far the smartest Jane Austen adaptation to come along since Amy Heckerling’s Clueless, and at least as much fun.”
— The Wall Street Journal

“ ... rowdy, exuberant ... thoroughly modern yet not at all contemporized. Kate Hamill’s felicitous adaptation gives us ageless emotions, couched in the mores and locutions of the past, yet timeless in their arduously suppressed intensity.”
—Time Out (New York)

“Masters of Illusion are often called magicians. But what do we call those who make invisible gems appear from nowhere out of nothing, who create life on the stage? Lost Nation Theater”  -  Bob Fisher on LNT’s Sense & Sensibility. Read the entirety of his review here

Check out our Trailer!