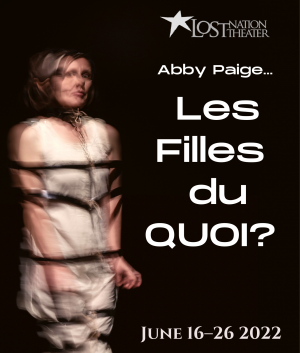 The new one-woman show by acclaimed Vermont performer, Abby Paige, is an autobiographical exploration of ancestry, identity, and storytelling.

An American with French-Canadian roots immigrates to Canada, a century after her great-grandparents immigrated in the opposite direction.
She has questions:

With this comedic, bilingual one-woman show, writer and performer Abby Paige looks for answers, crossing the borders between English and French, the past and the present, the living and the dead, history (L’Histoire) and stories (les histoires).

The show is bilingual, but you don't have to be!
Not only is Abby an amazing actor, but subtitles will be in use (both in-person and live-stream) to aid in your understanding of the lines spoken in French.

Les Filles du QUOI? has received development support from the Canada Council for the Arts and the New Brunswick Arts Board.

Les Filles Du Quoi? plays 7:30pm Thu/Fri/Sat; and 2pm Sun June 16–26, 2022
due to multiple requests, the window to purchase ON Demand Recording Tickets has been extended to July 1

directed by KIM A BENT

Check out this article in The Times Argus about the show!

"Ultimately, the show is about the borderlands of identity. Our sense of self shifts when we cross  the boundary between countries, between languages, and also, in some sense, between times.
The  poet Alice Notley says,
'I want to go as far back in time as / will comfort by causing my life not to have been. / But can never get far enough.”

I want to understand where I come from, beyond  genetics, beyond genealogy, beyond history.'

"People who imagine that history flatters them are impaled on their history like a butterfly on a pin and become incapable of seeing or changing themselves, or the world.”

Hear from Abby & Kim  - what they think about the show - and each other! HERE