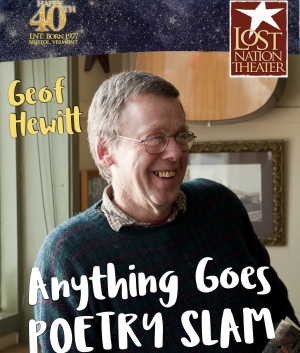 An “Anything Goes!” slam features a 5-minute time limit for writers and performers, with music encouraged, and “covers” okay if identified as such; even group performances are eligible for the fabulous prizes! Audience members, chosen at random, will score the performances. Grand Prize is Free admission for two to LNT’s Judevine! Yes, this is Anything Goes, though it’s an all-ages event, so discretion is required.

Can the single voice of an impassioned poet outscore a harp and guitar duet? - Only one way to find out! Come on Down for the fun!

Friday, April 14 at 7pm, in Lost Nation Theater's Lobby Cabaret.  It's Free!
(and no pre-registration required)

Geof Hewitt won Vermont's poetry slam championship in 2004 (by one-tenth of a point). There hasn't been a Vermont championship since, so he continues to brag that he is "Vermont's Reigning Poetry Slam Champion." He has been writing and publishing poems since his high-school days; his books are in good libraries, at better bookstores and available from the trunk of his car: just ask! Geof serves as slammaster at gatherings throughout New England, and often visits Vermont schools to spread the magic of writing and performing. He lives in Calais with his wife Janet. They have two grown children and two grandsons.

Running into poets on the street, they are excited to have Geof leading another Slam! They asked "Is Geof going to bring his nose harp this time?"