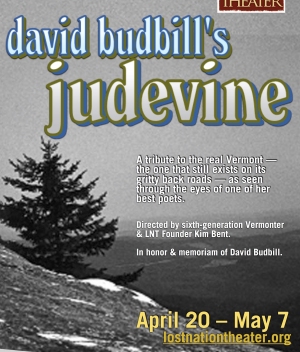 A poetic, funny, and earthy portrait of rural Vermont by David Budbill. Judevine comes home in a stellar show at Lost Nation Theater. This tribute to Vermont depicts ordinary people in a town called "Judevine", a poor town of incredible beauty & hardship.
By turns raucous & bawdy, delicate & painful, funny, loving & angry, it reveals the survival strength in the oppressed & hurt.  A tribute to the real Vermont - the one that still exits on her gritty back roads- as seen thru the eyes of one of her best poets.

Rated PG-13 for some cussin' and serious life situations

Lost Nation Theater is humbled and proud to kick off the Mainstage Season of its 40th Birthday year with one of its signature shows about Vermont.  This will be the 10th Anniversary of LNT's original Judevine Production.
We perform it in honor & in memory of David, who recently passed away. We are humbled to have the enthusiastic support of his widow Lois Eby and daughter Nadine Budbill.

And kicking off the kick-off to the season: an Opening Night Gala (Benefit) hosted by Rusty DeWees and Ellen McCullough-Lovell  on Friday April 21.
The Gala includes pre-show catered reception, the performance, and an after-party with the cast, crew, Lois, & Nadine. Get full details here

Check out the feature article in The Times Argus

Thoughts from the Judevine Cast

Here are some of David's thoughts on LNT's first production of Judevine in 2007:

"I'm delighted that JUDEVINE is finally back in northern Vermont; it's been 16 years...and it's time it came home.

I've written some new lines just for this production and cast, and Kim and I have come up with a new beginning for both Act I & Act II.

This is going to be a particularly excellent version of JUDEVINE.
We have a great cast and Kim Bent is the perfect person to direct this play.
Kim is a sixth generation native Vermonter, a farm boy in fact, and as such Kim has an authentic and intuitive knowledge of the real characters that inhabit the gritty and increasingly ignored back roads of the JUDEVINE landscape.
He understands the people in JUDEVINE.
All this, plus the professionalism and thoroughness of Lost Nation Theatre's approach to play production, assures the high quality of this particular version of JUDEVINE."

Five of those original cast members return in 2017's Judevine.

"Vermonters, I can't urge you enough to go see Judevine at the Lost Nation Theater. It's not only a play by one of Vermont's great poets, David Budbill, but it is searing, funny, and amazingly artistic. The actors are unforgettable -- including a half-mad, garrulous Quebecer, a human truck and human motorcycles! -- and the direction perfect. You will really be missing out on something special if you don't see this." - Bronwyn Fryer Front Porch Forum

"Essential Theater - Lost Nation Theater is presenting "Judevine" on several dates/times through May 7th. A critical social perspective--and an uplifting poetic one--on life in the Northeast Kingdom from the pen of David Budbill, Vermont's recently deceased master poet. A bit raucous, a bit baudy,  but totally enlightening. It's hard to imagine anyone walking away unchanged after witnessing this remarkable theater experience". - Chris Lovell 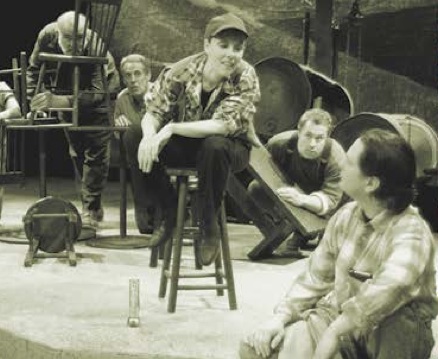