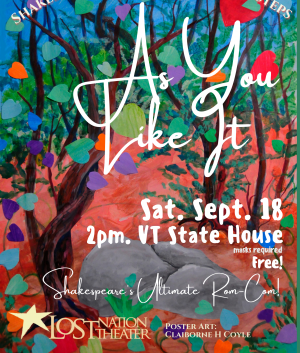 Fall Foliage Shakespeare on the State House Steps returns to Lost Nation Theater:
As You Like It

As You Like It is the ultimate "Rom-Com" - for no one writes lovesick lads & lasses like William Shakespeare!

We Did It! The rain held off and turned into brilliant sunshine, then back to wind & clouds, but we did it!
And you can see it "On Demand" through

Plus - performing and rehearsing as they would have in Shakespeare's day.
We are so fortunate to have Ann Harvey, noted Shakespeare expert, guiding us all the way!

This is a one-time only, FREE, abridged staged reading on the steps of the Vermont State House.

Cue Scripts (where the word "role" came from) will be used, enough movement to keep it clear for us all what  is happening in the story, with music from fiddler Susan Reid and composer Kathleen Keenan.

This is a Free Event, tho' donations are gratefully accepted.

Audiences are asked to remembers and adhere to social distancing protocols, wear masks, bring your own cushion or blanket, or low chair (you'll be sitting on the steps of the Vermont State House, or on the lawn), and have a great time!
Actors will have clear masks and face shields. Our own "abridged" version will run approximately 90 minutes. There will be no intermission.

We are excited to gather in person - but if you'd rather watch the On Demand recording, register for the link Here

Our As You Like It bridged staged reading brings together Lost Nation Theater favorites, from recent and wayyyy back seasons! -  and some folks we've been wanting to collaborate with for a long time!

We are excited to gather in person - but if you can't make it Saturday Sept 18th, or if you'd rather watch the On Demand recording, (or if it rains) register for the link Here

Get the Full Scoop on the show Here

We dedicate this production to the memories of Lost Nation Theater's longtime champions and Board Chair Anthony Otis and Treasurer Ted Richards.

25 years ago, Anthony and Ted were instrumental in getting LNT's Fall Foliage Shakespeare tradition off the ground.
They both loved this community, and the Vermont State House. As an english professor, Ted loved Shakespeare a Lot. As a member of "Friends of the Vermont State House", the Montpelier Historical Society, and as a lawyer/lobbyist, Anthony worked at and Loved the State House a lot!
Anthony and Ted both left this world in 2020, and it is our honor to have the opportunity to remember them and commemorate just one of the ways they eached shaped Lost Nation Theater and secured its future, with this staged reading on the state house steps.

(Lost Nation Theater & Essential Stages first "Fall Foliage Shakespeare" production was As You Like It in 1995, directed by Ann Harvey.)

Reinforcements for this project are coming in!!

Dan Renkin - noted fight choreographer and actor (Hamlet, Miracle Worker, Midsummer Nights Dream) is back - via the magic of zoom -  to help us how to design & execute a covid and cue script safe, yet convincing,  wrestling match between Charles the Wrestler (put up to no good by a jealous & evil elder brother) and the young Orlando.  Dan was last seen at LNT in our last full mainstage season! For 2019's Complete History of Comedy -Abridged, he concocted all the slapstick fights and starred alongside Rick Ames and Liz Davis.

Another beloved Dan - Dan Boomhower, is also jumping on board to help steer this Shakespeare Train.
With his 40 years experience creating arrangements for high school choirs, Dan is assisting composer Kathleen Keenan with harmonic arrangements to complement the melody lines. 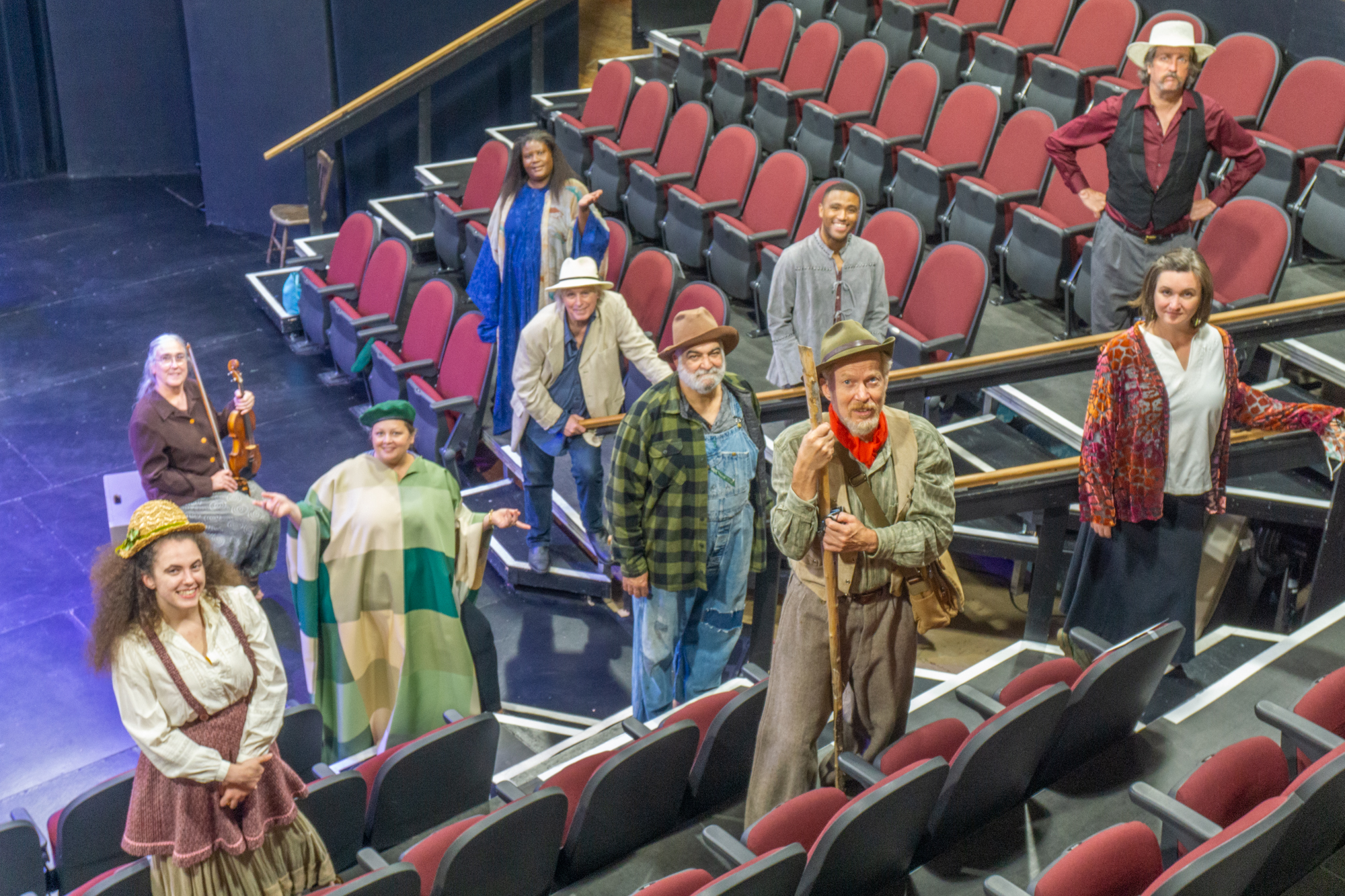