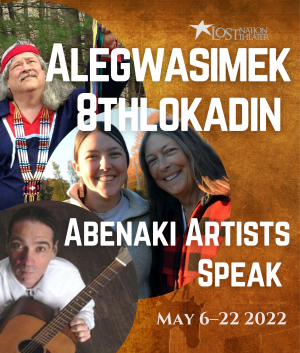 A three-week series celebrating the Abenaki culture in story, song, art and discussions!
A different event each week!

The series  title, translated from Abenaki, means "how one dreams: a storytelling gathering"

This series is funded in part by the Vermont Humanities Council.

Week One features singer Bryan Blanchette. On Friday & Saturday Night Bryan plays with his band and highlights his Abenaki humor. Sunday afternoon will feature Bryan singing more traditional tunes and sharing Abenaki dances - like the snake dance (and he hopes folks will volunteer to join in!)

Week Two features Rick Hunt (the "Jimi Hendrix of the magic marker") spontaneously creating murals in response to the tales told and songs sung by noted author, musician and storyteller Evan Pritchard - author of "No Word For Time."
Get More Info on Evan, Rick, and their presentation together, Here!

Week Three explores the Road to Recognition and highlights Abenaki agricultural traditions with Chief Shirly Hook, lawmaker Tom Stevens, language with  Mia Leonard (a member of a language learning community dedicated to learning and sharing the language), Moccasin Tracks producer Deb Riger and members of the Circle of Courage.

Throughout the Series, the artwork of Amy Hook Therrian (Koasek Traditional Band of the Koas Abenaki Nation Council of Chiefs member), will be on display in the LNT Lobby Gallery.

May 21, 11am: Circle of Courage (Brenda Gagne coordinates a youth group with the Abenaki Nation of Missisquoi-St. Francis/Sokoki Band - celebrating traditional Abenaki drum songs and dances that have been passed down from generation to generation. Along the way, the youth learn valuable lessons of leadership, patience, teamwork, honor and respect.

The “Road to Recognition” Program:
Waterbury, Vermont Representative Tom Stevens has been centrally involved over the past twelve years in sponsoring legislation that has led to the State of Vermont’s official recognition of the four Abenaki tribes---Elnu, Koasek, Nulhegan, and Missisquoi---who have lived on this land now known as Vermont since humans first inhabited it.

Following Representative Stephens talk, Ben Gray of Vermont Law School will address the recent efforts of our native indigenous people for recognition, reclamation, and reparation in many other local cases throughout the United States.

Question and answer sessions after each of these presentations will provide time for lively, informative, and clarifying conversation on all these topics.

And here's a podcast about the events on Moccasin Tracks

"Through traditional dancing and drumming, children learn the importance of understanding the old ways (and the rich Abenaki culture and heritage) while celebrating their role [and] place in the 21st century.”  The Abenaki Circle of Courage Afterschool Program puts the concepts of belonging, mastery, generosity, and independence into practice.

It is a program of The Abenaki Nation of Missisquoi-St. Francis/Sokoki Band.

Project Director, Brenda Gagne, is an Abenaki Community member. Brenda directs the “Circle of Courage” after-school cultural program for both Native and non-Native students in Swanton and Highgate, Vermont. She has been honored by the State of Vermont’s Department of Education for outstanding service.

Bryan is a singer-songwriter who brings more than ten thousand years of Abenaki tradition to his contemporary compositions.
Bryan also studied at the Berklee College of Music in Boston.

His shows will feature traditional native and original music, native humor, and maybe some dances!

"I believe and have been instructed that our culture lies within the language. It’s with that in mind that I write new songs, because our culture is alive and I want people to understand that. I started writing and performing contemporary music a few years ago to bring the beauty of our language to a wider audience and more attention to our language and culture."

Evan, of MI’kmaq and Celtic descent, is a Juilliard-trained musician, guitarist, composer. He has been doing field interviews with Native American elders since 1990, and has been the director of Center for Algonquin culture for the last 24 years.

A lecturer on native studies at Vassar, Pace, Marist, Columbia, SUNY, John Jay, University of Ontario, UMass, and Ramapough State, he has also presented at Gracie Mansion, AMNH, Smithsonian, and on line. He is currently presenting a retrospective of his mapping work at the Beacon Institute for Rivers and Estuaries (Clarkson University), and has been invited to lecture at Lehman College this spring. He has written over fifty books on native culture, history, language and spirituality.

He has performed some of his compositions live for up to 6000 people. His solo CDs include River Song, Earth Dance Anthology, Contemplations, Dancing Among the Clouds, Long Lost Feeling, and others.

Evan is best known as the leader of “Tribal Harmony,”an ever-changing collective of Native American musicians performing together before live audiences in all styles, and is its opening act, educator and impresario.

His performance with Rick Hunt will feature stories and songs!

It's often been said of visual artist Rick Hunt that he walks in two worlds: Native American and contemporary western culture.(Especially the world of Rock-n-Roll.) At LNT, we call him "the Jimi Hendrix of the Magic Marker!"

"The complete lack of artifice or pretense in Rick's works, combined with his ability to transcend his own rich and colourful world, time and experiences are part of what gives his art its hypnotic power. Music as well as other arts figure largely in Rick's art; , he is one of the few visual artists whose illustrations of the musicians and songs which resonate with him express them so well that the sounds of those lucky artists whose works he expresses through his pens and paints can be heard by seeing them even if the viewer has never heard the music!
Rick's art clearly reflects his rich life and experiences; his remarkable family and friends; his own imagination and background, which he's covered briefly in his below words...and continuously and fully in his visual genius, life and art unlike any other." -- Sally Sharp-Paulsen