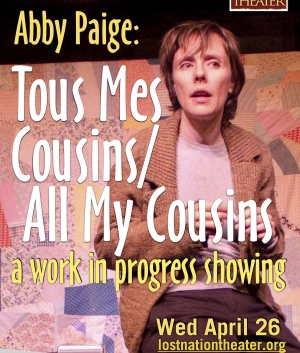 Wed April 26, Lost Nation Theater‘s On Dark Nights Series presents Abby Paige in a work-in-progress reading of Tous Mes Cousins – All My Cousins. - Her intimate new bilingual play about what it means to be French, to be family, and to be fed up with Jack Kerouac  Currently performing in Lost Nation’s Judevine, Abby, a favorite LNT actor, offers a special showing of her brand new solo ‘ Tous Mes Cousins/All My Cousins’  Exploring what it means to be Franco American on BOTH sides of the Border.

The presentation, which may also include snippets from her first solo show, the acclaimed Piecework: When We Were French,  is followed by discussion with the audience. And Abby Really Hopes You'll Stay and talk with her about the play.

donations accepted at the door.

“Are you French?” I’m asked this every now and then, where I live in Canada. How to answer this question? I’m not French-from-France, nor quebecoise, nor Acadian. I’m Franco-American, like Jack Kerouac. My solo show, Piecework: When We Were French, explored the enduring influence of Franco-American culture in Vermont and New England. Now, I am searching for a way to make Franco-Americans visible to their northern cousins.

I’m grateful for the chance to present a reading of the current draft of this work-in-progress, tentatively titled Tous mes cousins / All My Cousins, at Lost Nation Theater, which has provided a creative home for my work many times in the past. This new, bilingual play, a companion to Piecework, will capture the complex relationships between distant relatives, who tell different stories about the ancestors they share. This informal evening will include a presentation of 30-40 minutes of new material, in addition to a lively discussion of the themes that it explores and the challenges of playwriting in general. I hope you can join us!." -  Abby on Tous Mes Cousins/All My Cousins

Abby Paige on her work:

"“As an actor and theatre artist, I am interested in work that creates experiences of startling intimacy between audiences and performers and tells stories in which people can find themselves.”

"Abby Paige, who was born and raised in Vermont, is of French Canadian descent on her mother’s side. She now lives in New Brunswick, and Tous mes cousins / All My Cousins explores the notion of not being French enough in Canada and perhaps being too French in the United States.

Abby Paige does this brilliantly, with multiple characters and their monologues—herself, a breathless teenager, an uncle, and Jack Kerouac, who both irritates and fascinates her. Abby Paige’s transition from one character to another was seamless, and when she went from being the teenage girl to being the uncle, she was almost unrecognizable. I especially loved the uncle’s monologue, where he told of how he occasionally went to an Italian friend’s home, where spaghetti was served—a real treat as the uncle didn’t get this at home—and where there was a picture of Mussolini in the basement.

Tous mes cousins / All My Cousins is an impressive beginning of an exploration of not only identity but also of the history of New England and French Canada. I’m really looking forward to seeing the finished show."

-  From the Hinterlands
(A Maine Magazine)