A Christmas Carol with Willem Lange - live at LNT 2022 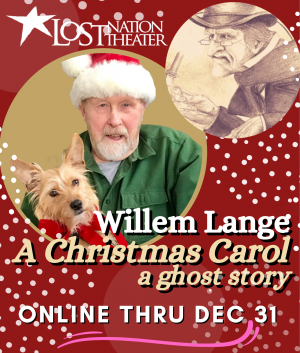 Famed & beloved yankee storyteller Willem Lange will be live on stage at Lost Nation Theater performing his reading of "A Christmas Carol: a ghost story" by Charles Dickens.
Lange uses the cutting of the novel Charles Dickens himself used when performing the tale.

The show will be Live-in-Person and  Live-Streamed
Friday, December 16 at 7pm. (postponed due to snowstorm!)

We will also record Lange's performance for "on demand" viewing.
"On Demand Video" Will be available thru Dec 26th. Dec 31st!

to get the recording, click the "buy tickets" button.

The Recording will be released Saturday Dec 17, and be viewable through Christmas!
In Person attendance currently requires the wearing of masks. Read LNT's full covid-safety protocols statement.

Lange supports one of his favorite non-profit organizations through this performance: The Haven homeless shelter/antipoverty group in the Upper Valley.

LNT will donate 10% of any profits from the show to local centers working to address homeless and food insecurity.

*LNT will honor all tickets purchased for In Person or Live Stream attendance on Monday, December 19th. If ticket buyers for the 16th are unable to join on the 19th ,  LNT will provide a link to the on-demand recording, and the availability of htat recording is being extended through December 31st. Thanks for your patience and understanding.

Want to know how Willem got started on his 47-year-run performing this reading of Dickens' Christmas Carol?
Read the story in Willem's own words here.

And read even more 'juicy details' about our production here.

Photos from Willem performing at Lost Nation Theater in 2020!